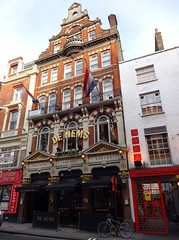 Dutch bar on the outskirts of Chinatown, serving a wide range of continental beers. They normally have an impressive number of interesting beers on tap, as well as many more in bottles. The correct glassware is available for most of the bottled beers. Since the Nicholson's takeover, they also have two handpumps on the bar for real ale.

It can be a bit pricey, though in recent years the prices seem to have come down a little in comparative terms; Belle Vue Kriek was £4.05/pint as of July 2010. (They no longer have kriek on draught all the time, sadly, as they used to do several years ago.)

When Ewan visited in September 2007, the beers available on tap were Oranjeboom, Amstel, Grolsch, Heineken, Stella, Hoegaarden, Leffe Blonde, Leffe Brune, Maredsous Blonde, De Koninck, Artois Bock, Fruli Strawberry, and Belle Vue Kriek. A later visit by Kake and others, in January 2008, was less impressive; when the first of our group arrived around 5:30pm, the Oranjeboom was already off, and when we left a few hours later there were more beers off than on. This may have been because they didn't expect much custom on a Monday night in January. They did however still have their usual good range of bottled beers.

Dutch-style pub-type food is served all day; chips, lots of deep-fried and breaded things, but rather than the choice being based around onion rings and breaded mushrooms, you instead get to nibble on bitterballen, frikadellen, vlammetjes, and kasssoufflees. Chips (£1.75 as of January 2008) are served with mayonnaise, and there are bottles of curry ketchup on the tables (chips sampled by Kake in January 2008 were an average size portion, and perfectly adequate if nothing special). The bittergarnituur platter (£10 as of January 2008) is a good way to try out a selection of Dutch pub food annotated photo.

It's pretty dark inside, and the music can be loud. On more than one visit, it's been quite difficult to hear even the person you're sitting next to. It gets very crowded in the evenings, particularly during weekdays after work (6pm onwards). Drinking outside on the pavement is permitted, and they have a few tables and chairs out there, as well as a space heater for the winter months. In good weather, the large windows at the front of the pub are opened to let in the sunlight and breeze. There's an upstairs bar and seating area which can be booked.

Accessibility: No steps to get in, but the toilets are in the basement, down a winding staircase.