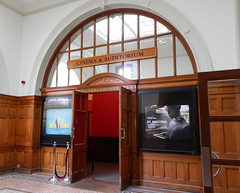 Initially located in the Croydon Clocktower photo (the same building as the Museum of Croydon), but this facility was closed in mid-2011. As of mid-2012, there was a campaign running to return the cinema to the Clocktower, and as of March 2014 this had been successful, with the launch screening occurring on Thursday 27 March.

(Note that although the postcode of this place begins "CR9", it's actually physically located within the CR0 postal district. See Locale CR9 for an explanation.)