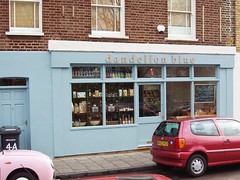 Dandelion Blue was a delicatessen on Coulgate Street in Brockley. It closed at the end of 2008. In August 2009, Brockley Central reported that the new owner of the lease would be opening another deli on the premises; this did indeed come to pass, and the new place is called Browns of Brockley.

The information below is retained for people who want to know what it was like as Dandelion Blue.

On Ewan's February 2008 visit, this colourful delicatessen around the corner from Degustation had friendly staff and, according to the logo and website, a love of food.

The difference from Degustation is that this one seems to have a focus on English food producers, with plenty of teas, a range of pickles and jams, Cartmel sticky toffee puddings, meat and cheese, and bespoke ready meals. There was also Italian pasta, a range of olive oils, fresh bread and produce (though this looked slightly less enticing), herbs, spices and drygoods and plenty of other nice things.