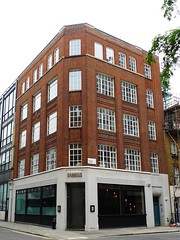 Dabbous was a Modern European restaurant in Fitzrovia. It closed for good in July 2017.

It has a very stripped-down look inside, with unfinished walls photo, metal struts, and functional-looking chairs and tables. A separate cocktail bar (open to non-diners) is in the basement.

Kake and friends visited for lunch on a Friday in October 2012. We decided to go for the tasting menu (£54, and only available if everyone in your party is having it) photo.

A small dish of olives photo arrived at the table first; plain and simple, and on the dry/bitter side (in a good way). Bread arrived in a date-stamped paper bag along with some very light, whipped butter photo. The bread was delicious, with a perfect crackly crust.

The meal proper started with two vegetable courses. First, a blanched and chilled wedge of hispi cabbage, served with sunflower mayonnaise, sunflower petals, and sunflower seeds photo. This was great; the cabbage was perfectly cooked to a nice crispness, and its faintly bitter flavour worked well with the extra-tangy mayonnaise.

Next up was paper-thin celeriac, lightly scorched, served with muscat grapes, toasted hazelnuts, lovage leaves, and a clear, refreshing, yet complex sauce photo. This was a little tricky to eat with the spoon and fork provided, but worth the effort.

Our third course was coddled egg with mushrooms and smoked butter photo; the texture of this was lovely, but the subtle flavour of the egg was masked by over-enthusiastic salting. (Another of our party felt the salt levels of this and the next dish were fine though.)

Braised halibut with celery, pickled garlic, and "coastal herbs" (oyster leaf and sea aster) photo was also a little over-salty, and the celery was again tricky to eat with a spoon and fork. On the other hand, the fish was cooked perfectly despite its over-seasoning, the lemon verbena sauce was beautifully flavoured, and the pink tinge of the pickled garlic made a very pretty plate.

Barbecued Iberico pork with savoury acorn praline, turnip tops, and apple vinegar photo was a mixed bag. The pork was perfectly cooked; juicy, tender without being mushy, and flavourful. The acorn praline was rather cloying, though, and there wasn't enough of the apple vinegar to counteract this. The turnip tops were also rather stringy, and for some reason consisted mainly of stalks rather than leaves.

We decided to pay the £9 supplement for a cheese course, which gave us four cheeses, all strongly flavoured (including my new favourite cheese, Lancashire Black Bomb) and hence served in small portions. A baked apple and some thin, crisp toast accompanied this.

Our first dessert was fresh milk curds infused with fig leaves, served with fresh fig and pistachios photo. The fig leaves gave the curd a wonderfully coconutty flavour. A second dessert of chocolate soaked brioche with barley malt icecream, azuki beans, and pecans photo was a little much at this point, too big and too rich; only half of our party managed to finish it, and only then with a struggle.

Coffee and tea ended the meal, along with some petits fours photo that somehow involved beeswax, though by this point we'd grown weary of having to ask the waitstaff to repeat their explanations every time (see below), so it's unclear exactly what role the beeswax played.

The room was very noisy, with conversations echoing from the hard surfaces, and the feedback effect of this leading to some of our fellow diners almost shouting at points. This meant it was difficult to hear the explanations of the dishes given by the waitstaff, though they were fairly patient at being asked to repeat themselves. Service in general was excellent; friendly and welcoming, and present when needed without being hovery. (The maitre d' in particular made a significant contribution to our enjoyment of the occasion, joining in our conversations and never making us feel that we were taking up too much of his time.)

Kake's verdict: I felt the tasting menu was a little too skewed towards a rich end to the meal, and I was disappointed by the saltiness of the egg and fish dishes. The meal was also on the verge of being a bit too nutty, with four of the seven courses prominently featuring nuts and seeds. Overall, though, I liked both the general idea of the food (and the service) here and would come back. I'd probably go a la carte next time in order to avoid too much dessertiness, and I also might avoid it in the evening, since it was a little too noisy even with the downstairs bar empty at lunchtime.

Ewan and Kerry visited just the downstairs cocktail bar during London Cocktail Week in October 2012, where they were offering one of their cocktails for a reduced price. Once past the staff guarding the restaurant upstairs, the bar is a large open space, with similar minimalist style to upstairs (hard surfaces, unfinished walls). Several of the tables were reserved, but there was still plenty of space at 6pm on a weekday. The cocktail we had there (the Anthony Edwards) was excellent, just the right level of tartness. There's a short food menu for the bar, including a steak sandwich for £14, as well as a good range of nibbles.

Accessibility: A step to get in, perhaps around kerb-height. The restaurant seating area is on one level, though some of the tables are quite close together. The bar and the toilets are in the basement, down a flight of stairs with a bend in the middle and a sturdy handrail (on both sides, though the staircase is wide enough that you probably couldn't hold both at once). The taps in the loos are stopcock-style and a little stiff, and could be painful or difficult to turn on and off if you don't have much grip strength.