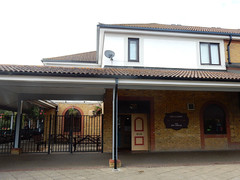 It's dimly lit inside, with very little natural light — the windows are few and small. Tables and chairs are dark varnished wood, the carpet is a subtly-patterned brown, and the ceiling is low. Banquette seating, upholstered in brown and cream stripes, runs around the walls, interrupted here and there by wood-and-glass privacy screens with an image of the Cutty Sark itself etched into the glass. Outside is a patio with picnic benches and a view over the canal photo of canal from another viewpoint. A small area to one side of the bar holds a large collection of trophies as well as a dartboard (unsurprisingly, as the pub is run by darts champion Andy Fordham and his wife, Jenny).

Kake visited on a Wednesday early evening in September 2015. There were about half a dozen other customers in when I arrived a little before 5pm, all apparently regulars. Others arrived during my visit, and by 5:30pm it was relatively lively. Music was playing, not too loud. There was a cat wandering around.

Only one of the four handpumps was clipped, for Abbot Ale. A pint of lime and soda was £1.20.

According to a sign outside as of September 2015, food is served 8am-9:30pm Mon-Sun, though we saw no evidence of this on our visit.

Accessibility: No steps to get in, but the central area (the only part with access to the bar) is up a couple of small steps.