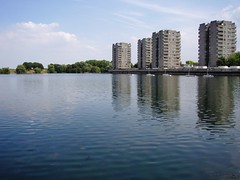 A sprawling area of South London split further by compass directions (for example Thamesmead West). It is made up of housing estates and a smattering of industry, built since the 1960s on what was once marshland alongside the River Thames. It lies largely within SE28, with parts in SE2 (Thamesmead South, pictured) and DA18 (Thamesmead East).

The area is criss-crossed by canals (required to help with drainage of the marshy land), as well as a number of lakes and green spaces.

There was a proposal to link Thamesmead to Beckton and the north of the river by the Thames Gateway Bridge, but this was cancelled in November 2008 (though it may not be entirely dead).

Auto-generated list of things in Thamesmead (view them on a map):