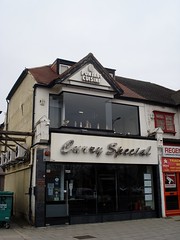 Punjabi restaurant in Newbury Park, in the 2007 Good Curry Guide.

It's on two levels, with seating for around 45-50 on each floor. The decor is smart and interesting without being gaudy, and the tables are laid with white linen tablecloths and napkins.

Kake and Bec visited on a Thursday lunchtime in October 2013, arriving around 1pm. There were no other customers during our visit. Indian music videos were playing on a flatscreen, with the sound on but not too loud.

Garlic fried mogo (cassava chips; £5) photo was nicely garlicky but not as crispy as it should have been. The accompanying tamarind sauce brightened it up nicely though.

Karahi paneer tikka masala (fried paneer in sauce; £7) photo was well-proportioned; not too much paneer, not too much sauce. The sauce was nicely savoury, and not overly oily.

Palak chollay (chickpeas with spinach; £6.75) photo was also nicely flavoured and not too oily. Bec really liked this, though the chickpeas were a little undercooked for Kake's taste.

Service was friendly and helpful. We were offered a choice of medium or hot spicing in our dishes. Tap water was brought in a jug, and replenished relatively soon after we emptied it. No service charge was added to the bill photo.

Child-friendliness: They have at least two highchairs with trays. The ladies' toilet has a pull-down baby change table with strap (not sure if there's one in the men's as well).

Accessibility: No steps to get in, but the toilets are on the first floor, up a spiral staircase with a sturdy handrail.