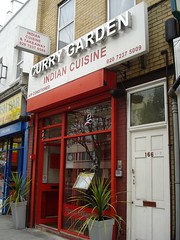 Curry Garden was an Indian restaurant near Surrey Quays Station. According to Google Street View, by June 2019 it had closed down and been replaced by a Chinese restaurant called Tea Garden.

bob visited on a Monday night in June 2009. There were three other customers in already, but the restaurant can seat 40.

The menu is a pretty standard curryhouse one. The meat samosas were fine, but a touch overfried — the pastry was really quite hard. My curry was bland and swimming in oil/ghee as was the aubergine side dish. The keema naan was pretty good, and rice was fine. The pistachio kulfi was a standard pre-prepared version from Amora. In total I paid about £23 excluding service.