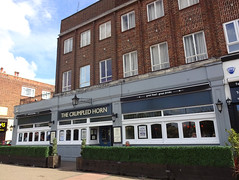 Inside, it's a single low-ceilinged room, broken up here and there with pillars. A dark-varnished wooden floor leads forward from the entrance, past some high-table seating, to the bar at the back. A pair of swirly-carpeted daises to either side offer plenty of normal-height seating, and there are also a couple of booths tucked away at the side of the bar. There's a few tables out the front too.

It seems to have undergone something of a refurb since our first visit back in 2009, and now has various "upmarket" touches such as monochrome feature walls and a tiled bar back with the pub's name painted on.

Kake first visited on a Monday afternoon in June 2009. Soft rock was playing quietly, and there were a fair few other customers in. Service was friendly. Three real ales were available, all under the umbrella of Marston's PLC despite the sign above the bar advertising "a changing selection of real ales from all over the country" — Jennings Honey Bole (£1.35/half), Banks's Bitter (£1.25/half), and Marston's Pedigree (and on a subsequent visit in July 2009 it was just Pedigree and Banks's Bitter).

Kake visited again on a Thursday afternoon in September 2017. There were lots of people in when I arrived around 1:30pm, though much of this seemed to be down to a large group that had booked out one of the daises, and in any case there were still several free tables. Music was playing, almost entirely drowned out by conversation. There were again three ales on, again all Marston's-owned brands: Banks's Bitter, Banks's Blazing Fury, and Marston's Pedigree. A pint of lime and soda was £1.25.

Standard pub food is served all day, and they offer table service for both food and drinks (though drinks at least can also be ordered at the bar, and there were plenty of people in for just a drink during all our visits).

According to a sign seen outside in September 2014, there's a quiz night every Tuesday.

Child-friendliness: They have a children's menu, and several high chairs (the type with no tray and very little back support).

Accessibility: No steps to get in, and it's step-free to the toilets, bar, and about half of the seating area. There's a RADAR-locked accessible toilet with nappy change facilities.