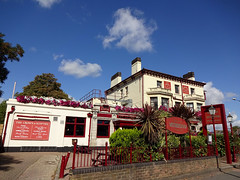 It was previously owned and run by Wetherspoons, but was sold to a private investor in Spring 2019. The pub remains open, but is no longer a Wetherspoons.

It's a large space, but broken up with pillars and etched-glass dividers to give plenty of hideaway corners. The ceiling is low and painted a deep burgundy, but windows all around the exterior wall provide enough natural light to avoid any hint of gloominess. Decor is traditional, with a patterned carpet, varnished dark wood tables and chairs, and padded banquettes. It still looks Wetherspoons-ish, with no apparent major alterations as of our May 2019 visit.

When Kake visited around 11am on Friday in September 2018, before the takeover, there were quite a few people in but still plenty of spare tables. When Rowley Birkin QC visited about 10 pm on the 2019 May Day bank holiday, after the change of ownership, there were about 15 other customers. One change is there was music playing (standard pop) from some sort of device behind the bar. The staff (three of them) were very pleasant, clearly wanting the place to work.

The handpumps in September 2018 were clipped for Upham Autumn Leaves, Dorset Brewing Company Durdle Door, Woodforde's Red Admiral, Sharp's Doom Bar, Marston's Old Empire IPA, Greene King Abbot Ale, and Ruddles Best, as well as two real ciders: Gwynt Y Ddraig Black Dragon and Westons Old Rosie. A pint of lime and soda was 80p. In May 2019, only five of the ten handpulls were in use (four ales and a cider), but they still seemed to be charging Wetherspoons prices. Mister Chubb's Session Bitter (£3.40/pint) was in good condition, and Adnam's Lighthouse (£2.40/pint) was okay.

According to the pub's Facebook page as of May 2019, food is still served. Rowley Birkin QC overheard a customer asking (I assume) whether they'd still be doing meal deals as Wetherspoons used to, and the barperson replied "some things are the same, some are different, I don't know really".