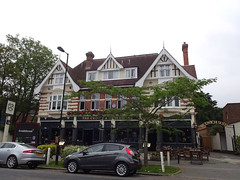 Mitchells and Butlers pub in Dulwich Village. It closed in September 2014 (PDF) in order to add hotel accommodation on the upper floors, but reopened in June 2017.

This is the only pub serving Dulwich Village, undoubtedly due to strict controls on development in this conservation area, being leafy, genteel and upper-middle-class. The Crown & Greyhound compensates by being extensive in size, with at least four different areas for drinking, still divided by old Victorian wood-and-etched-glass partitions, as well as a restaurant area, a large part-covered garden at the back, and plenty of seating out the front. A large central bar extends in various directions to serve the disparate areas, topped by a wooden gantry with stained glass panels.

Decor is dominated by heavy wooden tables and wooden panelling, with varnished floorboards underfoot. The place is well-kept and clean as you might expect from this area, and on a Summer's day the garden is particularly pleasant, extending quite far back on several levels.

We've visited twice now, most recently in June 2018. On our June 2010 visit, the real ales were Harvey's Best, London Pride, and Adnam's Broadside, while keg beers included Meantime London Pale Ale (£3.60/pint), Franziskaner, Pilsner Urquell (£3.60/pint), Sharp's Chalky's Bark, and many others. Also on offer were sangria (in jugs), homemade lemonade (served by the glass, £1.80, with a pleasingly bitter taste), and other seasonal drinks. In June 2018, there were five real ales on — London Pride, Purity Pure Ubu, Black Sheep Bitter, Sharp's Doom Bar, and Adnams Ghost Ship — and a pint of lime and soda was £1.85.

Food is served all day. In June 2010, Ewan and Kerry found the sharing plate (£13) photo to be pretty decent, consisting of mini-burgers (three each of lamb and beef), plenty of flatbread and hummous, peppers and cucumber, and chips.

In June 2018, Kake had the pan-fried seabass on tomato and herb gnocchi (£16) photo, which was good with a few small niggles. The fish had a nice sear on both sides of the fillets, while the flesh remained soft and flaky. Red and yellow cherry tomatoes were both well-flavoured, as were the green and black olives. However, the pea shoots on the side were slightly dried out, and the gnocchi were quite odd — there were only six of them (and they were quite small), and some of them seemed to have disintegrated, becoming squashed and soggy.

Service was friendly on both our visits, and notably helpful and efficient on our second visit despite their being short-staffed. We ordered and paid at the bar, but they seem to do table service for both food and drinks in the pub section as well as the restaurant.

Accessibility: Step-free to get in, via a shallow ramp, though the approach to this is uneven (rectangular cobblestones). No steps to the toilets, and the ladies' has a larger cubicle at the end with grab bars and a door that opens outwards.