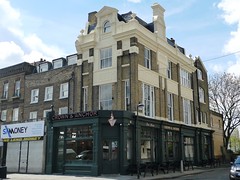 A refurbished 'craft beer' pub opened on Brixton Road by the same people behind The Jolly Butchers in Stoke Newington. It's situated about halfway between Brixton Station and Oval Station and in its former existence was a scruffy locals' boozer.

Needless to say, in preparing it for its new life, a lot of work has been done to the interior photo. The floors are varnished wood, the walls have been stripped back to the brickwork, and there are plenty of sturdy tables and chairs in what is a rather large and long single room. Lots of natural light comes in through the windows along both sides of the pub and on Ewan's visit a few days after (re)opening, the smell of paint and varnish was still strong.

The main attraction will of course be the range of keg and cask beers and ciders. There are 10 handpulls, three of which have cider or perry on them, and the others offer a range of ales including (on Ewan's April 2012 visit) Ascot Anastasia, Red IPA and Alley Cat, Dark Star Revelation, and Thornbridge Kipling (all priced around £3.60-£3.80 per pint) and listed on a chalkboard above the bar. These were in good condition on both bob's visits (May and June 2012), and served in handled jugs.

In addition to the taps, there's also a large range of bottled beers from many parts of the world and several local breweries, as well as a range of wines in a prominent wine rack behind the bar.

On a sunny Saturday afternoon visit in April 2012, the place slowly gathered customers while Ewan was there, with about 10-15 people in by 2pm (though this visit was prior to the opening of the kitchen). No music was playing, and the staff were friendly and offered advice about the beers. On bob's Thursday evening (May 2012) and Sunday afternoon (June 2012) visits, most of the tables were taken but finding one was easy enough.

The kitchen is situated at the back of the pub. The menu changes every day, though on Sundays they seem to only do roast dinners. In May 2012 bob had an excellent ribeye steak (£14.50), which came with some very good chips photo. I asked for it blue, and it probably was photo.