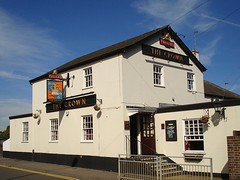 The Crown was a Fuller's pub in Hillingdon. According to the June/July 2017 London Drinker, it has now closed due to sale of the freehold, and its future is uncertain.

There are three drinking areas inside. The one reached directly from the carpark is public bar style, carpeted, with a TV and dartboard, a few stools at the bar, and the remaining seating provided by a couple of high-backed benches.

Further in are two somewhat smarter rooms, though not overly posh, with hardwood floors covered here and there by rugs. The first of these is level with the public bar, and the bar servery itself extends round here. The second is down a couple of steps and looks onto the beer garden; the feel is almost of a room in someone's house, with a fireplace, couple of mirrors, and a small sideboard.

The beer garden is really quite impressive, with a few different areas variously paved, grassed over, and covered by a pergola. A park bench, a fire pit, and an old stone sink provide extra interest, while a foliage-draped arch leads up a couple of steps into a small tucked-away area with no seating that almost seems to have been forgotten about. Overall, it feels like the perfect place for children to explore.

Kake and bob visited on a Saturday afternoon in September 2012. There were three real ales on, all from Fuller's: London Pride (£3/pint), Chiswick, and ESB. A pint of lime and soda was £1.

There were a handful of other people in when we arrived around 3:30pm. Service was solicitous; the staff member who served bob wasn't satisfied with the way his pint looked, and poured it away and went to change the barrel without being asked, apologising beforehand that this would take a little while.

According to a board outside on our September 2012 visit, food is served noon-3pm and 6pm-9pm Mon-Sat; and noon-4pm Sun.

The barn (a Grade II listed building) has its own bar and is available for functions.

According to their website as of September 2010 (two years before our visit), children and dogs are welcome, though there may have been a change of management since, so we're not sure of the current policy.

Accessibility: The entrance on Colham Green Road (pictured on this page) has steps, but there's a ramp to the carpark-side entrance. Once you're in, it's step-free to the bar, the toilets, and some of the interior seating. Part of the interior seating is down two large steps with no actual handrail but there are convenient bits of partition to hang on to. There are also steps to the beer garden.