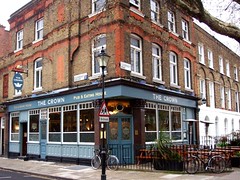 Being a little way off crowded Upper Street meant that even early evening on a Friday (in April 2008) there were tables available -- though no shortage of customers, so the ambience was excellent. This was helped by the well-preserved bar area, which retains some of the dividing panels between the front and rear of the bar area photo and the Victorian snob screens. Background music was present but not too intrusive.

There are additional tables out the front with patio heaters, in a fenced-off area. The front door is to the side of the pub, and reached by navigating through the tables. There are significantly fewer outside during Winter, though.

On a visit in April 2008, the ales were Pride, ESB, India Pale Ale and Chiswick. They also had Fuller's Honey Dew and London Porter, Scrumpy Jack cider, Hoegaarden, Staropramen and others on tap, as well as a full selection of Belgian and other bottled beers, all listed on a chalkboard at the end of the main room. A smallish but well-selected wine list is between £5.50-7 for a large glass, and bottles at £15.50-30.

Bar snacks are available, such as peanuts with the pub's own spicy seasoning (£2, and tasty), and there's a full food menu with mains priced £10-15 (steak being most expensive). The open kitchen is situated at the back of the pub in a smaller room off the main area, which has a few seats and is significantly quieter when the place is busy. On one visit, the baked onion filled with butternut squash and feta cheese was only bettered by the plentiful vegetable dauphinoise (both around £10). The fish pie also got a positive review. Standards were just as high in January 2009, and Ewan enjoyed an excellent mushroom risotto (£9.50).

The bar is happy to reserve tables with a few days' notice (as Ewan did for 20 people on a Wednesday evening). Staff were friendly and extra flatbread was supplied for one of the platters with no problems.

A recommended pub, and well worth visiting.