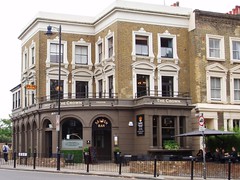 A pleasant Geronimo pub on the south side of [Victoria Park]?, in Bow which was refurbished and reopened as a pub during 2008.

The pub space is bright and airy, with several original features retained, such as the entrance with its tiling (giving the original name, the Crown Hotel). Inside the seating curves around behind the entrance lobby, with a customary blend of mismatched furniture -- small tables with chairs just a little too big, and large but high tables with high stools to match, as well as some armchairs and couches. There's a fire in one corner near the front entrance, though it's a stylish modern one set into the wall and behind firm glass.

The bar features London Pride, Sharp's Doom Bar and Adnam's Bitter on the three handpulls, as well as Konig Pilsener (£3.60/pint) and Budvar lagers amongst others. Food service is handled from a separate counter, which can be a little confusing (it is geared to table service for food, it seems), though service is on the whole friendly.

The food menu was fairly short on the Sunday Ewan visited, with two roast options (beef and turkey), and five mains covering the range of meats and a vegetarian option. As it was, this option (roasted pumpkin and butternut squash, with braised gem lettuce and wild mushrooms, £9.50) was extremely tasty and attractively presented photo.