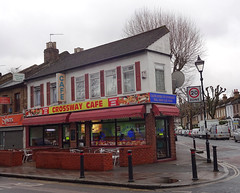 It comes with the standard formica tables and fixed plastic seats. Food is nothing special, but covers all the greasy spoon bases.

A commenter on this page (SOgGySOCkS, June 2008) tells us: "This was a cafe before the second war. I lived in the flat over the top from 1945-47. It was run by Mabel and 'Pop'. Wren's paper shop was next door and Lewis had a garage by the bridge. There were prefabs opposite. An old church hall was across the road under the bridge." According to a comment on the East Dulwich Forum, it's been called Crossways Cafe since the 1980s.