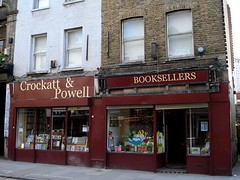 Crockatt and Powell was an independent bookshop on Lower Marsh near Waterloo Station. Sadly, it closed for good on Thursday 30 July 2009.

Independent bookshop on Lower Marsh near Waterloo Station. Its name comes from the surnames of the co-owners. This branch opened at the end of 2005; in 2008 they opened another branch in Fulham, but it closed down a year later.

The shop has two rooms, one of which has a nice big leather armchair to sit in and read. They have a decent London section, and seem to make a point of promoting local authors.

According to the London-SE1 site, they aim to get any book within 24 hours, and deliver to SE1 addresses at no charge.