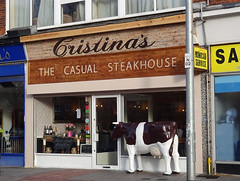 Steak restaurant in Barking. It used to also offer a separate menu of Romanian specialties, but stopped doing this in late 2015.

It seats around 40 people, at widely-spaced tables including a few large enough for groups of six or more. The floor is stripped boards, echoed by the stripped wood tabletops. The room feels spacious and uncluttered, while the chandelier-style lighting and ornately-framed mirrors ensure it doesn't seem too plain.

The menu photo as of Dec 2016 includes several cuts of steak, plus starters and other mains, some of them changing monthly. The wine list photo as of April 2014 is relatively short, but includes two reds and two whites by the glass.

Kake and friends (including a toddler) have visited a few times now, most recently in December 2016. On a Tuesday evening in April 2014, there were already a couple of other customers in when we arrived around 6:45pm, and others turned up while we were there. On a Sunday evening in December 2016, the place was about a quarter full at 5pm. Music was playing, not too loud on our first visit, but slightly louder than ideal for conversation on our second.

In April 2014 we all decided to go for the mid-week set menu photo. A starter of grilled asparagus wrapped in prosciutto (£6 on the a la carte menu) photo consisted of well-chosen stems of asparagus, large enough to hold up to grilling but not over-large, and plenty of ham wrapped around. A minor niggle is that they should have peeled off the tough skin at the bottom of the stems. Bruschetta (£4 on the a la carte menu) photo featured some very nicely seasoned tomatoes, enlivened with fresh herbs.

For mains on the same visit, three of us ordered featherblade steaks (£14 for 10oz on the a la carte menu); two rare, one medium. The rare steaks were properly rare, and had a good crust on the outside photo. Our fourth diner chose the grilled salmon with mango, pomegranate, and avocado salsa (£15 on the a la carte menu) photo, which was again cooked well; not overdone, but with some good browning on the exterior. Hanger steak in December 2016 (£12 for 6oz including two sides) was good too, with plenty of flavour; sauteed kale was nicely garlicky, and skin-on chips were fine apart from arriving cold.

Desserts were disappointing on our April 2014 visit (including a huge, bland tiramisu photo which contained no alcohol) but much improved by December 2016.

Service on both visits was very friendly, particularly towards the child we had with us. They brought the child's food quickly on both our visits, but on our second visit we had to wait substantially longer for the adults' food. No service charge was added to the bill.

Child-friendliness: They have a short children's menu with one vegetarian option photo as of Dec 2016. They have at least one high chair, with tray, suitable for a toddler but perhaps a little large for a baby photo. There are no baby-change facilities, and the ladies' toilet at least is a little too small to do a change on the floor.

Accessibility: No steps in (just a small ridge). Completely step-free once you're in.

Kake's verdict: I'd certainly recommend the steaks to any local meat-lovers, and they're probably worth a short journey too, particularly at mid-week prices. I'd happily bring a child along again, too.