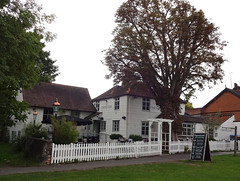 It's situated right at the edge of Epsom, next to a duckpond and just a minute's walk away from Epsom Common. The space inside is divided into several separate areas, none of them large; it just manages to feel cosy rather than cluttered with infrastructure. Decor is on the modern side, and although there are a few touches that veer rather too far towards the Ember Inns style of "dictated by corporate head office", overall it manages to appear sufficiently individual.

Seating is provided by regular upright chairs and tables, but there's also a small semi-circular banquette area, and up a few steps is an attic-like space with a variety of seating options including half-height booth-style padded seats overlooking the pond. Below this is yet another space, also accessed via a few steps, which on our visit was already laid out for diners. There's a decent size patio-style beer garden too.

Kake visited on a Tuesday morning in August 2017. There was just one other customer when I arrived shortly after their opening time of 10am. No music was playing (unless you count the faint strains of the radio coming from the kitchen).

Three of the five handpumps were clipped, offering Sharp's Doom Bar, Wimbledon Common, and Butcome Bitter, and the staff member on duty told me the other two would be ready later that day, with Surrey Hills Ranmore and Lilley's Apple & Blackberry Cider. A pint of lime and soda was 40p; they didn't put any ice in it for some reason (and I didn't notice until I'd got to a table).

Food is served all day, including breakfast photo of menu as of August 2017, lunch, afternoon tea, and dinner.

According to a notice seen in August 2017, quiz night is Monday from 8pm.

Child-friendliness: They have a separate and relatively interesting children's menu including several vegetarian options photo as of August 2017.

Dog-friendliness: According to a board seen outside in August 2017, they are dog friendly.

Accessibility: Step-free access via a ramp through the garden, with a 90-degree turn and a ridged threshold at the top. Once you're in, there's no steps to the toilets, including a RADAR-locked accessible one. Much of the interior seating is up or down steps, but there's a reasonable amount on the level.