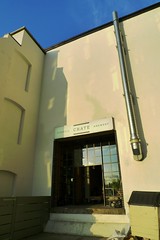 A microbrewery and pizzeria alongside the River Lea canal in Hackney Wick. It opened in July 2012.

Opening just in time for the Olympics, adjoining the site on the other side of the canal, this microbrewery has a lot of the feeling of West Coast US brewpubs. It's sited in a repurposed industrial unit, with brick walls and concrete floors photo, its truck docking bay now a window at one end of the bar. The bar and kitchen fill half the room, and trestle tables make up the rest, with some more seating on the terrace outside by the canal.

There are six draught keg taps, and four handpulls for ale. On Ewan's August 2012 visit, two of the handpulls were off, the others dispensing the Crate IPA (£4/pint, but quite a strong brew), and Williams Cock o' the Walk photo. The draught keg included Paulaner, as well as handwritten signs for Magic Rock Rapture and Orchard Pig cider (presumably guests), amongst others. They also had plenty of bottled beers, including their Crate IPA and Lager in 330ml bottles and the Crate Golden Ale in 500ml bottles (all £3.50).

The food menu offers around five or six different pizzas, all hovering around the £10 mark. Ewan and Kerry on a 2012 visit tried the sage and truffled potato pizza (£10) photo, presented attractively on a wooden board and sliced into eight pieces. This was a really excellent pizza: very thin crispy crust, plenty of cheese, really good flavour.

On a the day we visited, the Sunday evening of the Olympic closing ceremony 2012, the place was quite busy, though we were able to grab the end of one table (another was reserved). Lots of people were on the terrace outside, and music was playing increasingly loudly (loud enough to make conversation quite difficult). Weekend evening visits since have also seen the place quite crowded and noisy, though on nice evenings, the outdoor tables stretch quite far from the bar.

Accessibility: All toilets are on the same level, including an accessible toilet, and there are no steps to enter.