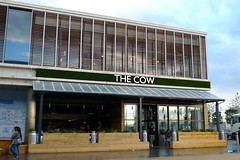 A busy pub at the edge of the huge Westfield Stratford City shopping precinct. It's located at the end of Chestnut Plaza, near the pedestrian crossings across Westfield Avenue, possibly marginally closer to Stratford Station than to Stratford International Station.

The pub is set out on three levels, the lower of which had fairly loud music playing on Ewan's September 2011 visit, as well as a TV screen (no sound) showing the news. The ground floor level has a long bar at one side, with a range of seating options, including plenty of tables laid out in several rows opposite the bar. There's also a function room to the rear which seats about 20 and can be booked, and additional seating in a small but slightly landscaped smoking area to the front by the entrance. Upstairs is a mezzanine floor with further tables for seating, overlooking the main area below. The top floor has its own smaller bar and is exclusively reserved for diners. On the first Sunday afternoon after opening, the place is fairly packed, but space for sitting can still be found at the tables.

The bar has two banks of four handpulls each, which in September 2011 were offering Adnam's Broadside, Young's London Gold, Sharp's Cornish Coaster, and Redemption Pale Ale (£3.50/pint). There are also fonts for Bitburger, Estrella Damm, Beck's Vier, Staropramen, Erdiner, Peroni and some other keg beers. At the end of the bar is a selection of scotch eggs and pork pies.

A fairly extensive wine menu is laid out on each of the tables, and food menus are also available, with a typically pared-down Geronimo Inns offering, covering most of the pub food bases. The scotch eggs available on the bar (around £3.50) are excellent quality, and a good size in Ewan's opinion.

Accessibility: Step-free access, as well as an accessible toilet on the top floor (reached by a lift). The men's toilets are also on this level, though ladies are on the mezzanine.