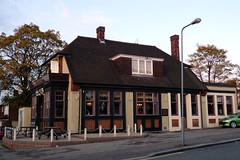 The County was a decent pub not too far from Newbury Park Station. As of spring 2011, Pubs Galore reports that it is closed and boarded up.

A decent pub not too far from Newbury Park Station.

This pub shows signs of having been refurbished in a more modern style, with bare wooden floors, chocolate-brown walls and ceiling, and a number of large leatherette couches with low tables, arrayed over several levels. However, it remains friendly, with a smattering of locals watching football on a large screen TV on Ewan's Saturday afternoon visit in November 2009, and a similar number in at 3pm on the Thursday afternoon of Kake's March 2010 visit (though this time the TV was showing Sky News at a slightly-too-loud sound level).

There are three handpulls for ale. Only Spitfire was available on our November 2009 visit, though it was perfectly fine. In March 2010 there were two on; Ruddles County (£1.45/half) and Greene King IPA. There's also the standard range of draught lagers as well as a few premium ones.

A room off to the side has a few more couches and a pool table. There's also a few picnic tables out the front of the pub.

As of March 2010, food is served noon-9pm. It's a fairly standard pub menu (though it doesn't appear to be a corporate one, given the absence of small-print disclaimers), with mains priced around £7. They also do a £5 meal deal noon-5pm Mon-Sat; a bowl of "home-made soup of the day", a sandwich on crusty bloomer (seven filling choices including two vegetarian), and half a pint of pop.

Signs seen in March 2010 advertised a quiz night on Thursdays from 8pm, karaoke every Friday evening, and jazz every Sunday evening.

Accessibility: Three steps up to get in, and two more to get to the ladies'. There may be a side entrance with fewer or even no steps, though; not sure.