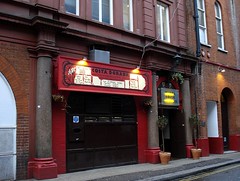 Costa Dorada was a large Spanish restaurant and bar on Hanway Street, just off Oxford Street. It has now closed. As of March 2016, along with everything else on this side of the street, it's part-demolished photo.

Note: There was a change of ownership around autumn 2010, possibly in conjunction with a brief closure, but as of the second week of September 2010 it's definitely still open, and they assure us that everything is still the same as before. (We haven't visited since the change, so can't personally verify this.)

Kat and Rick visited on a Friday night in late 2007 as part of a large party; as such we were offered the set menu rather than the tapas or a la carte menus, however the waiters were happy to give us additional dishes of Serrano ham and cheese, spiced sausage and bread whilst waiting for our starters to arrive.

The cocktail menu was limited to the usual fare, but were all priced at a very reasonable £4. Kat had a very tasty caipirinha in an enormous glass (nearly too big to hold in one hand). There was a choice of two lagers: Rick opted for San Miguel. The bar is sectioned off from the main restaurant but with good views to the dancefloor in the centre.

The flamenco itself was quite astonishing — the atmosphere is surprisingly intimate for such a large space, especially later on in the evening when the lights are dimmed. As a result the two dancers' performance and the guitar/vocal accompaniment felt very intense. Unfortunately from where we were sitting we could not see the couple's feet, however we could see their facial expressions (and hear their stamping) very well indeed!

For £25 a head, the set menu offered three courses. For starters we chose (more) ham and cheese, plus prawns with chilli and garlic; swordfish with grilled vegetables and salad for the main course, and creme caramel for dessert. The swordfish was average, the vegetables consisted of a few sad looking peppers — however we left before the dessert arrived (the flamenco dancing seemed to bring food service to a halt, though drinks were flowing freely).

The vegetarians in our party were not very well catered for: the veggie tapas options were extremely limited and the House Salad starter arrived with tuna despite being marked as vegetarian on the set menu (though no ingredients were actually stated), however it was quickly swapped for a replacement with green beans and boiled egg. Also a vegetarian paella main course was undercooked and worryingly 'crunchy'.

Kat's verdict: Most of the service problems could probably be attributed to the size of our party — I wouldn't mind returning here in a group of three or four for cocktails, the odd plate of tapas and the captivating flamenco.