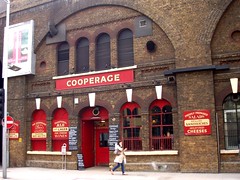 The Cooperage was a Davy's pub under the arches of London Bridge Station. It has now closed permanently photo, due to redevelopment in connection with upgrades to the station.

A Davy's pub under the arches of London Bridge Station.

In common with this chain of pubs and wine bars, there's a focus on the after-work professional, reflected in the weekday only opening hours, with a good number of suited drinkers in there after work on a Monday evening.

The decor makes a virtue of the prominent arches of the station, and retains decorations from what was presumably its former usage as a cooper's (barrel-maker). There's a bare wooden floor and sturdy tables and couches in what's a fairly small but busy area. A room at the back, down a few steps, can be booked for functions.

The bar focuses on the wine, as expected from this chain (and which is good quality, even the house red), but also offers their Davy's Old Wallop and Ordinary Bitter ales, alongside a seasonal Shepherd Neame (Late Red) in October 2009. Prices are fairly steep even for the area, but ales are served in pewter tankards.