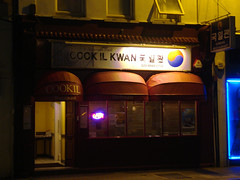 Cook Il Kwan was a Korean and Japanese restaurant in New Malden, very near New Malden Station. It has now closed. As of 2017 the premises are occupied by a Korean restaurant called Seoul Ori photo.

Korean and Japanese restaurant in New Malden, very near New Malden Station. The Korean name on the frontage is 쿡일콴, but its English name isn't entirely clear; frontage, menu, and receipts disagree, so it may actually be called "Cookil Kwan" or even simply "Cookil".

Entry is into a small room with seating for a dozen people, and a corridor with three other small rooms coming off it leads to more seating at the back. The tables have inset burners for Korean barbecue, as well as small vases containing fabric flowers. The menu photos as of September 2011 is extensive, with both Korean and Japanese dishes, including bibimbap and sushi.

Kake visited on a Tuesday evening in September 2011. Aside from a small party in one of the rooms leading off the corridor, I was the only customer. Music was playing quietly: ABBA, the Bee Gees, and various easy listening.

I had the yukhoe dolsot bibimbap (£9) photo, which is a rice-and-vegetable dish (bibimbap) served in a hot stone bowl (dolsot) to crisp up the rice, topped with minced raw steak (yukhoe) and a raw egg, all to be mixed together thoroughly before eating, letting the mince and egg cook lightly in the heat of the stone bowl and the other ingredients. It was pretty good; the ingredients were fresh and in good proportion to each other. The price included miso soup and four side dishes (banchan): kimchi, beansprouts, spinach, and cabbage, as well as three nicely refreshing pieces of melon at the end.

I also got some futomaki (thick-rolled sushi; £4.50) to take away; this was less good, with the rice lacking seasoning.

Service was fine. A 10% service charge was added to the bill.

Accessibility: A step to get in, but it's all level once you're in.