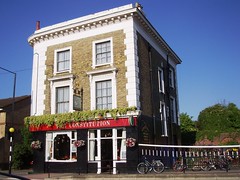 According to the Camden New Journal in early February 2020, Young's bought up the pub and promptly closed it "for a six-month refurbishment".

This pub, founded in 1858, is the last remaining building from the old Agar Town, a short-lived working-class community of the mid-19th century which was swept away around 1866 by the development of St Pancras Station and the train lines leading into it.

The pub itself is entered from the street at the upper level, where there's a reasonably sized space with a pool table. A even larger, and very attractive, beer garden can be found out the back overlooking the canal, decorated by plenty of flowers and shrubbery, and well-tended. Downstairs (at the level of the canal path itself) is a venue where DJs play and live music is hosted occasionally, according to advertising in the pub.

There are three ale handpumps, with Deuchars IPA and Adnam's Broadside, as well as a guest ale, which in September 2008 was Skinners Betty Stoggs (£2.90/pint). Service is friendly and the place is a comfortable mix of younger and more established locals, with little of the hollow trendiness of nearby Camden Town.

Signs indicate a basic range of pub food is available, but there is no indication as to what time.