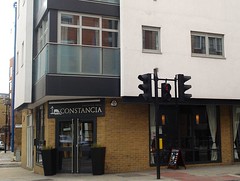 It's located in a new-build on the corner of Tower Bridge Road and Tanner Street — where the Raven In The Tower pub used to be, according to LondonSE1. Although it bears some of the trappings of a chain (you can even buy Constancia-branded tshirts on their website, if you have a mind to), it's an independent operation.

Inside are red-painted breezeblock walls and dark wood tables free of any linen. Large windows give a not very inspiring view onto Tower Bridge Road — Tower Bridge itself is a little too far north to be seen, and the only bridge in sight is a railway bridge with the lines feeding into London Bridge Station.

Kake and bob visited on a Tuesday evening in December 2009. We could actually smell the place half a block away, with the enticing smell of grilled meat drifting down Tower Bridge Road. Arriving a little after 7:30pm, there was no trouble finding us a table, though an hour later the place was full. We were asked where we preferred to sit, but no indication was given why we might prefer to choose one area over another. We said we didn't mind, and they seated us in the back part opposite the open grill — while this did give bob a great view of the large slabs of cooking meat, it was rather noisy from the extractor fan, and our clothes still smelled of smoke the next day. Music was playing, not overly loudly in itself, but in combination with the hum from the extractor fan it led to everyone having to raise their voices to be heard by the time the place was full.

The menu photo is unsurprisingly focussed on large lumps of meat, though they do have a couple of vegetarian dishes (e.g. grilled portobello mushrooms with pesto, £8). We went for the Parrillada Constancia (mixed grill, £23/person, minimum two people), which included a 10oz sirloin, an 11oz ribeye, two chorizo, one morcilla, and a dish of grilled provolone meat photo, cheese photo. Sides are ordered separately; we chose tomato and onion salad (£4) and chips (£3.90) photo.

The steaks arrived rare as requested; they hadn't managed to get quite as good a char as Hawksmoor did a couple of months back, but it was certainly a very good effort. It's perhaps worth noting that they hadn't left the steaks to rest before serving them on their coal-fired tabletop grill, so bob should perhaps have waited more than a couple of seconds before diving in and carving up. The chorizo was fine (made in-house according to Dos Hermanos, made locally according to Time Out), and the morcilla was tender and crumbly.

An accompaniment of chimichurri was made with dried herbs rather than fresh — fresh would have been better, and surely it is not impossible to get fresh oregano in London. Similarly, the provolone had a strong flavour of dried oregano.

The tomato and onion salad was fridge-cold, which was a shame, and the tomatoes slightly mealy. This is perhaps no more than we deserved for ordering fresh tomatoes in winter — though Fay Maschler's review (linked below) mentions that it was no better in the summer. Chips, on the other hand, were good; crisp on the outside and fluffy in the centre, and not overly greasy.

To finish, pumpkin in syrup with cream (£4.50) was really quite interesting; the pumpkin was candied.

Bread (nothing special, nothing terrible) was provided free of charge, both on arrival (with a tasty little dip of finely-chopped pickles in mayonnaise) and again with the main course to accompany the cheese. Tap water arrived swiftly in a jug with ice and lemon. Service was friendly, unstuffy, and informative throughout.

Accessibility: No step to get in (just a small ridge), and the ladies' doubles as an accessible toilet.