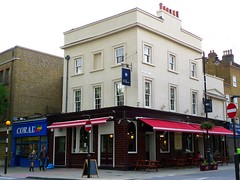 Previously a gastropub located at the end of Chapel Market in Islington, this has now closed. As of June 2012, the premises are occupied by another gastropub called Hundred Crows Rising.

The information below is retained for people who want to know what it was like as The Compass.

A gastropub located at the end of Chapel Market in Islington, this used to be The Salmon and Compass, but changed owners in May 2009.

There's not much change on the outside from its former incarnation, with the attractive red glazed tiling still in place, but inside the dispiriting modern stylings (dominated by hard metal surfaces) have made way for more pubby wooden tables and fittings and a polished floor. The space is still open and rectangular, with tables under the front windows and another row between them and the bar, as well as a couple of larger tables with banquette seating secreted away to the side, but the feel is a little friendlier.

At the same time as the refit, four handpulls have been installed. On a November 2010 visit, these were dispensing Cheddar Valley cider, Adnam's Bitter, Whitstable Brewery East India Pale Ale, and York Brewery Jack o'Lantern (the last presumably a guest). There are also the usual draught taps, including some interesting beers such as Bitburger, and plenty of wines and spirits available.

On a Friday lunchtime the place didn't have many patrons at 12:30pm, but filled up over the following hour, though was consequently a little understaffed (two chefs in the open kitchen at the end of the bar, and a single person tending the bar and delivering food). Service remained friendly, however, and there was no significant delay in getting food and drinks orders out.

The strength of this pub is in its food, however. The menu clearly changes regularly photo of menu, Nov 2010 and sticks to a short list of starters, mains and desserts (presumably limited by the small size of the kitchen area), but all that Ewan tried were executed well. Prices are a little above the standard for pubs, but the food and ingredients are likewise of a higher quality.

A pre-meal snack of bread and butter (£2) photo was clearly freshly-baked (still warm), and with a light texture. For mains, Ewan's chicken stuffed with merguez served with a four bean & chorizo stew (£13) was perfectly cooked and filled with flavour (not to mention with merguez sausage, adding a welcome spiciness), while Kat's braised pig cheeks on buttered swede with a cider sauce (£13) photo was also well-received.

Ewan's verdict: As a pub, it's still not the most inviting space, but as a food destination, it's definitely worth a visit if in the area, and I'd be happy to return.