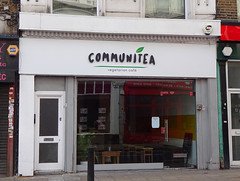 It's a small space, but has an open, uncluttered feel, aided by the floor-to-ceiling front window and plain-painted walls. Tables are reclaimed planks atop iron frames, and seating is a mix of upholstered stools and banquettes with colourful yellow plastic bucket seats. At the very back is a small nook containing a few groceries and large jars of herbs, spices, and dry goods sold by weight.

Kake has visited several times now, most recently in February 2020. On a Monday lunchtime in August 2018 there was just one other customer when I arrived a little before 1pm, though a couple of others arrived while I was there. On a Monday morning in the same month I was the first customer at their (then) opening time of 8am, with another turning up after an hour or so. On a Friday lunchtime in September 2019 it was pretty lively, with all tables (though not all seats) taken at 12:15pm. Indian vocal music was playing on all our visits, not too loud, and service was friendly and helpful.

In September 2019, "fulosophy" (ful mudames; £5.50 including bread) photo had perfectly softened beans, a good mix of mashed and whole, intermingled with pieces of lightly cooked onion that retained just enough crunch for a good textural contrast. A drizzle of tahini on top went really well. Flatbread on the side was perhaps a little too chewy for Kake's taste, but this is more of a personal preference than a criticism.

No service charge was added on any of our visits, but there's a tip jar by the till.

Child-friendliness: They have at least three IKEA Antilop highchairs with at least one tray, and there have been babies and/or children present on almost all our visits. No obvious nappy-changing facilities, though; there certainly isn't room in the toilet.