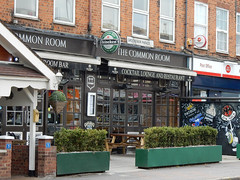 The Common Room was a pub near Ealing Common Station. As of August 2019 its website states that it is "closed for good".

It has a single large, open room with some large tables along one wall, and smaller ones filling in the space, in what is a fairly modern pub/bar space. Carpet ensures that it retains some cosiness, and pillars block some tables' view of the large wall-mounted screen showing sports at one end of the bar (there's another smaller one near the front window as well). There's a seating area out the front too, with retractable awnings and heating to keep the smokers warm and dry bad weather (however when the weather is more clement, this area's open to the elements).

On a cold Saturday afternoon in November 2008, the place was quite full with people loudly watching a rugby match (New Zealand supporters mostly, it seems), but there were still plenty of tables away from the screen-fixated crowds.

Accessibility: No steps to get in, and level access to the bar, seating, and toilets once you're in.