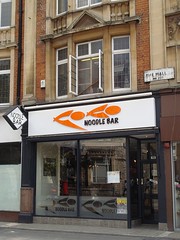 Now closed; was a pan-Asian noodle bar in Ealing. As of February 2015 the premises are occupied by a sushi bar called Kobe Sushi.

Seating is at long tables with fixed benches, and multiple parties may be seated at each. There are a few smaller tables at the front by the window, too. Jars of chilli-oil-with-bits-in are provided on each table.

Kake and Billy visited on a Thursday late lunchtime in April 2011. There were a fair few other people in, but there was no trouble finding us a space.

Grilled pork dumplings (£3.80 for five) photo were actually deep-fried (this wasn't a surprise; the menu description said so). They were OK, though the brief deep-frying hadn't done much for the skins; usually, one would expect grilled dumplings to have a nice brown crust on the underside, but these had very little colour.

Hanoi crispy tofu (£4.20) photo wasn't bad; the tofu was fried competently and the sauce was OK. Boiled rice (£2.50) was fine, and came in an enormous portion, easily enough for two people — it would have been nice to have had the option to choose a smaller portion.

Kake's verdict: Cheap, acceptable; wouldn't go back unless I was in the area, on a budget, and very hungry.

Accessibility: No step to get in. The toilets are up a flight of stairs with a sturdy handrail, and the cubicles in the ladies' are tiny.