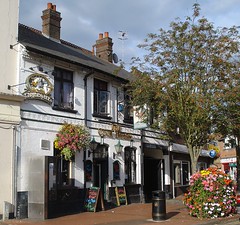 The Cock Tavern was a live music pub in Chesham. It closed down in May 2010. According to the Bucks Free Press, it was then converted into flats. However, as of September 2015 the ground-floor windows are covered with newspaper photo.

The decor is very basic, with a tatty carpet on the floor and plain-painted walls, some with a multitude of scuffmarks. Well-used tealights sit on the tables. There's a dartboard, but it has a table and chairs in front of it. A couple of fruit machines flash silently along the walls. There's a beer garden out the back, partly grassed over, with several picnic tables.

Kake visited on a Thursday afternoon in October 2009. Only one of the three handpumps was on, offering Old Rosie cider (£1.60/half). The other two had London Pride and Courage Best clips turned around to indicate they were off. When I arrived around 3:30pm, there were no other customers, rather a contrast to the Misty Moon across the road. Music was playing — Queen, Enrique Iglesias, Nelly Furtado, etc, possibly from the jukebox.

As of October 2009 they have live music most Fridays and Saturdays, and an open mic every Wednesday from 9pm.

Accessibility: Level access to get in and to all areas including toilets and beer garden.