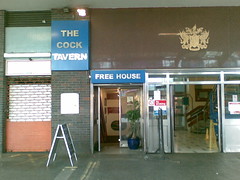 A pub in Smithfield under the Market, known for opening early for market traders. It is now closed, and appears to have shut in late-2013.

The pub is down a flight of steps at the eastern end of the Market building itself and has a series of large open (if rather darkly lit) spaces with long tables and a bar counter opposite the door. There are TV screens showing news and sport.

The food is all obviously sourced from the market, with plenty of good quality meat available. Breakfast is served 6am-10:30am, lunch and dinner from noon-7:30pm. There are a range of meaty breakfasts, with a special Cock Tavern breakfast including a rump steak, liver, kidneys, black pudding, sausage, bacon and eggs with beans for £10. A more modest breakfast option is the Smithfield Breakfast (around £7 for the same but without liver and steak) photo, which Ewan tried in May 2010 and was very tasty, though lacking in potato or bread (these and other extras can be added to any breakfast for a small amount). There are other, more familiar set breakfasts available though.

Comment added by her welshness: I really liked the food here - its good old fashioned 'home' cooking. Check out the Xmas menu if you happen to be around at that time, it is very Dickensian/the Rules style cooking.

Comment added by DrHyde: At 6:30 on a cold dark winter morning I needed breakfast, so went to the Cock. Steak, liver, kidneys, sossidge, bacon, black pud, egg, a bottomless pot of tea, and a pint of Guinness for a tenner. Result! I was a bit worried when I realised that they'd taken my order without asking how I wanted the steak cooked, but when it arrived, it had been cooked just right - that is, it had had the concept of fire explained to it but no more. It was all really good quality meat, the steak being sooooo tender and juicy. Go there. Now.