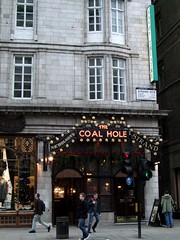 Nicholson's (Mitchells and Butlers) pub on the Strand.

There are a few different seating areas inside, though a traditional-but-smart theme is evident throughout. Tables and chairs are highly polished wood, and the windows are leaded with entwined "SWL" initials worked into the pattern (according to beer historians Boak & Bailey, this refers to a previous name of "Strand Wine Lodge").

Entry is into a fairly narrow bar area with high stools and tables running along the wall opposite the bar itself; this opens up into a standing area with a chessboard-pattern floor, a few normal chairs and tables, a flatscreen, and a fruit machine. Tucked away around the back of the bar is the cosy little "Wolf Parlour", with armchairs clustered around a fireplace.

A flight of stairs sweeps up to a mezzanine area, which gives a good view not only down onto the bar but also of the women-with-grapes mouldings up by the beamed ceiling photo. More stairs lead down to the basement bar, which is smaller and cosier and has its own bar (though with fewer handpumps, and only one clipped on our September 2012 visit). There's also a back entrance photo which is handy for the basement bar (and the ladies'). Finally, there are a few tall stools and tables in the alley alongside photo.

Kake visited on a Thursday lunchtime in September 2012. There were seven real ales on: Brains The Rev. James, Doom Bar, London Pride, Adnams Explorer, Moor Natural Beauty, Nicholson's Pale Ale, and Roosters Welsummer. It's perhaps worth noting that the last three of these are brewed specifically for Nicholson's. They also had various lagers on tap including Suffolk Blonde, Pilsner Urquell, and Kozel.

It wasn't too busy when I arrived around noon, but started filling up during my visit (though there were still tables free when I left at 12:45pm). There was no music playing when I got there, but it was switched on around 12:30pm; big band/orchestral/vocal jazz.

According to their website as of September 2012, food is served 10am-10pm Mon-Sun, from a standard Nicholson's menu.

Accessibility: A step to get in (kerb-height, though it doesn't appear so from the side; just go around the pillar to the front edge). Gents' toilets are on the ground floor but the ladies' are down a couple of flights of stairs with a landing in the middle and a sturdy handrail on one side. Much of the (non-high-stool) seating is up or down steps, including the mezzanine area which is up a flight of stairs with a bend at the bottom and a sturdy handrail on both sides most but not all of the way up.