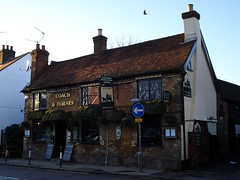 Decent enough Greene King pub in Rickmansworth serving some rather good food. It has two bar areas and a restaurant area too, reached through the back of the left-hand bar. The right-hand bar is possibly not always open.

Kake visited on a Monday afternoon in December 2007, and sat in the left-hand bar. I arrived shortly before 3pm, and there were several customers there already, which is a good sign for a Monday. Beers available were Abbot Ale (£2.80/pint), Greene King IPA, and Rocking Rudolph. The Abbot was fine, and I had two pints of it.

For my late lunch, I ordered the chef's special of beef bourguignonne with mashed potato and garden vegetables (£9.90) photo. This was really good; loads of flavour in the beef stew, vegetables (mangetout and green beans) cooked perfectly al dente, and excellent mash with a good real potato flavour and just enough lumps to make it clear that it had never been anywhere near a packet. A good-sized portion too (slightly more than I could eat).

They were playing piped music, but quietly, and it was mostly drowned out by conversation.

Food is served all day; noon-10pm Mon-Sat and noon-9:30pm Sun. They also offer "lunchtime bar specials" for £5 between noon and 3pm.