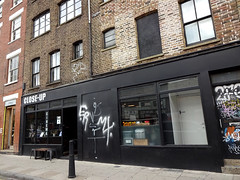 A small boutique cinema, cafe and DVD/Blu-ray rental library in Shoreditch, just off Brick Lane and near Shoreditch High Street Station. It opened in 2005, originally on Brick Lane itself, though the cinema opened some time after this.

The core of the business is its library of DVDs (and increasingly Blu-rays, though they even have one or two VHS tapes where these aren't available on any more modern format), which has been built up since 2005 and includes not just films released in the UK, but also foreign discs which are difficult to find anywhere else. The focus is largely on arthouse, foreign and experimental films, as well as documentaries. Free rental can be accessed with a £10/month membership (though there are also other membership options available).

In addition to the films, there are also a large number of periodicals and books about film, also available on loan to members.

Around 2014, it expanded its site to include a small 40-seat cinema, with comfortable seats and a large screen. The programme mainly covers artists' film, and experimental and documentary works, but also offers short retrospectives of major filmmakers, and themed programmes. Prices are up to £10 for adults (but £6 for members) and they generally have one screening per night at 7:30pm, though more at weekends.

There's also a licensed cafe, with seating on the ground floor (and more sofas downstairs). They have a small selection of interesting ex-rental and new DVDs/Blu-rays to purchase by the bar.

Accessibility: There's a step to get in, and some of the film collection is down a narrow staircase in the basement.