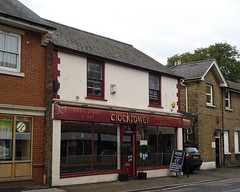 The Clocktower was a restaurant/bar just off the High Street in Epping. According to Google Street View, it closed down by October 2014.

Restaurant/bar just off the High Street in Epping.

It's not big, but not tiny either; they could probably seat around 40-50 people. The interior is divided into smaller areas by means of banquette seating that curls around on itself to provide privacy.

Kake visited on a Tuesday afternoon in September 2008, arriving a little after 4pm. There were a couple of other customers in sharing a pot of tea, but the place was otherwise empty. Piped music was playing, though not overly obtrusively; sort of swing/jazz/blues kind of stuff.

As well as the regular menu, they have a blackboard with around a dozen specials. On my visit, the starter specials looked more interesting than the mains; examples included plaice and smoked salmon mousse roulade with mixed leaves and lemon dressing (£5.75) and beetroot, broad bean, and walnut salad with rocket pesto dressing (£5.25).

I only wanted a light bite, so I had the vegetarian platter (£6.50) from the regular menu; it's listed under "starters and salads" but was actually reasonably substantial photo. I asked if I could have ciabatta (listed as coming with the antipasto platter) instead of the baguette that it usually comes with, and there was no problem with this. The ciabatta was fine, as was the rest of the platter, though the hummous was, well, strange — it had a strange texture and also an odd flavour that I couldn't identify, and tasted of neither chickpeas nor tahini nor lemon. The chargrilled red peppers, however, were excellent, and the artichoke hearts were dressed with decent olive oil rather than the sunflower oil that some places try to get away with.

A 175ml glass of house white was £3.35, and was fine. They had no problem bringing me a glass of iced tap water, though they didn't offer to replenish it once it was empty. The final bill had no service charge added.

They have a small patio out the back too; not sure whether smoking is allowed there, though.

Accessibility: One step up to get in; level access to seating area and toilets once you're in (didn't check the patio).