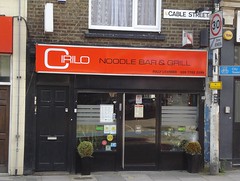 It's quite small, seating only around 25 people. The narrow space is made to seem bigger by careful use of mirrors, arranged along one wall opposite a large painting of a dragon. Decor is cafe-style but smart.

Kake, bob, and three friends (including a toddler) visited on a Tuesday evening in March 2014. We hadn't booked, but there was no problem finding us a table and a highchair. When we arrived around 7pm there were already a few other people in, and there was a slow but steady stream of eat-in and takeaway customers throughout the evening. Instrumental jazz was playing quietly.

Bottles of mineral water were already set out on all the tables, but when we asked for tap water these were removed and glasses of tap water quickly brought instead. A small bowl of freshly-roasted peanuts with garlic was also brought to the table (and didn't appear on the bill).

Vegetable spring rolls (£3 for 6) photo had a rather high ratio of wrapper to filling, making them fairly bland overall, but the toddler in our party enjoyed them. Duck and beansprout spring rolls (£5 for 3) photo were larger and more flavourful, with plenty of meat. Both plates came with a lovely little side salad featuring avocado and a zingy chilli dressing.

Crispy seaweed (£3) was a little too greasy, but had a pleasingly home-made style; the shreds of cabbage were cut thicker than usual and tasted freshly fried. Lamb skewers with spicy Hainan sauce (£5) photo had nicely chewy and flavourful lamb, though the meat could have had a bit more char on it. The sauce was delicious, with a fruity, sweet-savoury flavour, and we scooped up every last bit from the platter.

Adobo (£8) photo was perhaps our favourite of the main courses — crispy pork slices stewed in a dark sauce with a well-balanced sourness. Sinigang (£13) photo, although advertised as a tamarind-based stew, didn't have as much tamarind flavour as we'd wished for, but the prawns were large and plentiful and the vegetables were nicely varied (aubergine, tomato, broccoli, and onions).

A side dish of oyster mushrooms (£4.50) photo had a nicely savoury sauce, though perhaps contained a little too much thickening agent. Another side of sweet potato with fine beans (£4.50) photo featured pumpkin as a substitute for the sweet potato that the kitchen had run out of, but nevertheless offered a good contrast of textures, though the sauce again was perhaps too overthickened.

Vegetarian pancit guisado (£6) was a meal in itself; a large mound of rice vermicelli cooked to just the right amount of bite, with plenty of slivered vegetables to go along with them and a good toastiness from the wok-frying. Spicy fried rice (£3) perhaps went a little too far on the wok-fried toastiness, with a flavour verging on (though not quite reaching) burnt.

A dessert of halo-halo (£5.50) came in a tall glass with a striped wafer roll, and included a good variety of textures and flavours including ice cream, fruit syrups, aduki beans, and some firm, chewy fruit jellies.

Service was generally friendly, if a little nervously over-formal in places. The prawn crackers we asked for with our initial drinks never arrived (but we didn't chase them up, since the rest of our party arrived before we got impatient enough to). Our final bill photo came to £116.80 including wine and beer for four adults and one toddler; no service charge was added.

Kake's verdict: I'd like to come back and try more of the menu. If I was in the area and fancied a quick lunch, I might well come back just for the pancit.

Child-friendliness: They have at least one high chair (IKEA Antilop without the tray — we didn't ask if they had one available). The staff were very friendly and welcoming towards the toddler in our party.

Accessibility: Step-free to get in. Tiny step to toilets. Ladies' cubicle door opens outwards, men's opens inwards and is a bit of a squeeze.