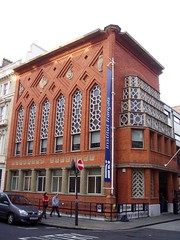 A cinema attached to the Institut Francais, a French education centre in South Kensington.

There's one screen, but a fairly large auditorium, with a raised stage area. Seats are functional, but not particularly comfortable. The cinema plays a good range of films, however, and not just French films but across a range of arthouse titles.