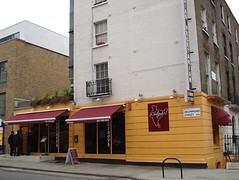 They do an all-you-can-eat buffet which as of April 2009 costs £7 and is available noon-2:30pm Monday to Friday, noon-5pm Saturday, and noon-10:30pm Sunday (no à la carte on Sundays - buffet only). Evening meals are also good value. As of April 2013 they appear not to serve alcohol.

On the a la carte menu, the starters offer particular richness and variety. The main dishes are (mostly) subtly flavoured rather than hotly spiced and there isn't as wide a range of these (type or flavour) as itsbruce would like, consisting mainly of dosas. There is also a tendency to stodge, although they do offer some lighter side dishes. Choosing a thali for the main course is probably the best way to get enough variety. photo of the menu as of April 2009

On a visit in April 2009, bob had the Chutney's Deluxe Thali (£11.50) photo. It was a little bland. The sweetcorn and spinach was the best thing.

In April 2013, Kake found the buffet dishes to be generally lacking in hot spices (though this was appreciated by some of our party). There was also a tendency to sweetness even in some of the savoury dishes. However, the selection was nicely varied, with both hot and cold options, and a good mix of sauced, dry, and salad dishes.

There is seating for about 30 people on the ground floor and more in the basement. They can cope with large parties, but service can be erratic when they are busy.

Child-friendliness: On our April 2012 visit there were no highchairs in evidence (though we didn't actually ask). The staff were friendly towards the toddler in our party, and didn't seem concerned about him making a mess. The buffet included items suitable for baby-led weaning (potatoes, cut-up fruits, deep-fried breads).

Accessibility: Two steps to get in. Some of the seating is in the basement, down a flight of stairs with handrail. The loos are down more steps from here, with no handrail.