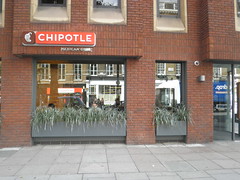 Baker Street branch of the US restaurant and takeaway chain.

The setup is similar to other London burrito hangouts such as Benito's Hat, Tortilla and Chilango — food is ordered at the counter, where a production line creates your meal in stages. According to their website, Chipotle make a point of using organic and sustainable produce wherever possible.

The layout at Baker Street comprises a few rows of long canteen-style tables, a handful of smaller tables, and a low counter by the large front window. There is a row of grassy plants in front of this window, so watching passers-by feels a bit like you're David Attenborough observing wildlife from the safety of the undergrowth (i.e. brilliant). It's quite noisy inside, and sometimes it is difficult to hear what the counter staff are saying.

On a Wednesday lunchtime visit in January 2013, the restaurant was busy but Kat still managed to find a seat and the queue wasn't too long. Unfortunately though, the pork filling had run out, so I opted for a steak burrito (£7) with black beans and all the fillings (including smoked sweetcorn). Guacamole was an extra £1.40; it was pretty good and there was quite a lot of it. In fact, this made the resulting burrito very wide and squat, which sadly meant that the distribution of ingredients was not ideal (ideally each bite would have a bit of everything).

The steak chunks were tasty and well-seasoned, and the (medium) salsa gave a good amount of heat. However the black beans were terribly undercooked — in the end I cracked open the burrito and picked out the good bits with a fork, which is kind of defeating the whole point of a burrito.

Tortilla chips were an extra 90p and came in a separate paper bag, but there were plenty of them, which was useful for mopping up the huge pile of guacamole.

Kat's verdict: I'd probably visit again if my workplace was nearer, but overall I still prefer Benito's Hat.