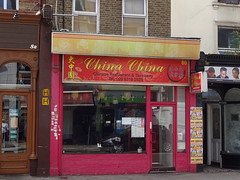 China China was a Chinese restaurant in Lewisham. It has now closed. As of September 2019 the premises are occupied by a Japanese restaurant called Toro Ramen.

Previously known as 樂味香 (lè wèi xiāng) photo, with the English names of "Le Wei Xiang" and the rather idiosyncratically-translated "Happy Smell" photo, it changed its name to Taste Inn around the start of 2012 photo. However, the menu and management remained the same. By late 2014 it had changed its name again, to China China, though again the menu remained the same. Note that as of August 2010 they accept cash only.

Inside, the decor is pretty cafe-like. The ground floor seats around 25 people at small two-person or four-person tables. There are a couple of private rooms upstairs, one of which at least has karaoke facilities.

Kake has visited several times now. Midweek in summer 2010, the place was practically empty, though we did note a couple of groups going upstairs for karaoke on the top floor (not audible from the ground-floor dining area). On another midweek visit in February 2011, it was somewhat busier, but this may have been because it was Chinese New Year's Eve. On a Sunday lunchtime in August 2013, Kake was the only customer.

Sliced pork with mashed garlic (蒜泥白肉/suàn ní bái ròu; £5 in July 2010) photo was wonderfully pungent, with a veritable mountain of mashed garlic — the kind of dish you'll be smelling of for days. The pork was thinly sliced, and dressed with just enough chilli oil that it had a hint of chilli heat and wasn't dry at all. Slivers of cucumber added a refreshing crunch. The portion was generously-sized, too.

Coriander with green pepper and onion (老虎菜/lǎo hǔ cài/tiger salad; £3 in August 2010) photo was a bit disappointing, with the vegetables cut into huge chunks rather than the thin slivers that would have made the flavours blend better (see Sanxia Renjia, W1T 2PP for a better rendition).

Shredded tripe with beef slices, sesame seeds, and chilli oil (夫妻肺片/fū qī fèi piàn/man-and-wife offal slices; £5 in August 2010) was good, with well-textured honeycomb tripe and small nibs of peanuts to add even more texture. It wasn't drenched in oil, but what oil there was was nicely hot.

Disappointingly, fried shredded pork in Peking sauce (京醬肉絲/jīng jiàng ròu sī; £6 in February 2011) photo didn't come with the beancurd pancakes that it should have, but rather the wheat-based pancakes normally served with crispy shredded duck.

Chinese leaves in vinegar (醋溜白菜/cù liù bái cài; £4 in July 2010) photo were nice and crunchy, with well-balanced flavours. Stir fried tong cai (熗炒空心菜/qiàng chǎo kōng xīn cài; £5 in August 2010) was similarly well-executed, gently flavoured with one or two dried red chillies and Sichuan peppercorns. Plain rice was pretty good, not at all mushy, and just right for picking up with chopsticks.

Service has generally been fine, though a little slow on our February 2011 visit (we suspect the large groups in the upstairs rooms were keeping them busy). They are licensed, but the house wine we tried in August 2010 was nothing special (albeit cheap at around £10/bottle). There was no background music on our first few visits, but they did have the TV on above the bar, showing Chinese soap operas with the sound on.