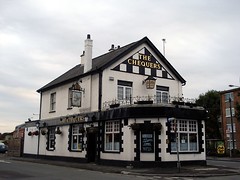 Nice little pub in Hornchurch, just down the road from Emerson Park Station.

It's quite small inside. Slightly confusingly, it has two entrances, one on each side, but they lead into the same room. This has bare floorboards, banquette seating around the edges, chairs and round wooden tables arranged around this; there are some stools at the bar too. There are a couple of large mirrors are on the walls, with a somewhat incongruous flatscreen mounted above/between them. Half-height lace curtains on the windows provide some privacy; the pub is basically on a roundabout, with fairly busy (for the area) roads wrapped around it.

Kake visited on a Wednesday evening in September 2008. Beers available were Black Sheep (very cheap, at £2.30/pint), Old Speckled Hen, and Young's Bitter. The Black Sheep was perfectly fine, and I had two pints of it.

They don't do any food - only filled rolls, and when they're gone they're gone (and at 6pm on the day of my visit they were in fact gone).

The flatscreen was showing horseracing when I arrived but was switched off once the event was over, and replaced by piped music (some London radio station - "London's heart" seems to be their tagline - not too loud).

There were about 15-20 people in at 6pm, which in a space this size means "about half full". Plenty of lively conversations were going on, but nobody was shouting or anything. The lady who served me when I arrived was doing a marvellous job of multitasking, and keeping a smile on her face as she did so. It was really quite nice there, and I was quite reluctant to leave and find food!

Accessibility: A step or two up to get in at both entrances; level access to bar, seating area, and toilets once you're in.