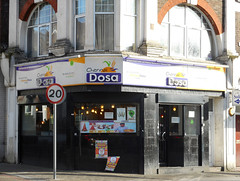 Chennai Dosa was a South Indian cafe/restaurant in Tooting near Tooting Bec Station, part of a small chain with about half a dozen branches around London. It closed down in late 2017 due to issues with the lease.

South Indian cafe/restaurant in Tooting near Tooting Bec Station. It's part of a small chain with about half a dozen branches around London. Some of the branches are vegetarian, but this one also serves meat.

It's quite informal, with cafe-style tables and little attention paid to decor. Jugs of tap water and metal cups sit on each table. It's not licenced, and doesn't allow BYO either.

The menu includes starters, dosas (very thin rice/lentil pancakes), rava dosas (as the previous but made with semolina), oothappam/uttappam (thick crepes with toppings baked in, sometimes described as Indian pizzas), gravies (curries), and a "tiffin" section with things like idli. A buffet is also available, though we're not sure what times.

Kake and friends visited on a Saturday evening in April 2015. There were a few others in when we arrived a little before 6pm, but plenty of free tables.

A starter of chilli paneer (£4) photo was fairly bland — the paneer itself was fine but the sauce had very little flavour. Our other starter of gobi 65 (£3.25) photo was better, with good spicing in the coating and the cauliflower itself cooked just right.

Mixed oothappam (£3) photo was fine, though the oothappam itself arrived lukewarm rather than hot. The accompanying sambar was good, and slightly thicker than usual. It also came with coconut, tomato, and green chilli chutneys.

No service charge was added to the bill, which came to just under £20 for the three of us.

secretlondon visited in March 2016. It was quiet, and does takeaways (but doesn't have a takeaway menu). One interesting thing was the kulfis for £2.50. I had a gulkand (rose) one which I liked.

Accessibility: Two fairly large steps to get in. Another step to some of the seating and the toilet, which is a single large cubicle with grab bars but ordinary taps, lock, etc.