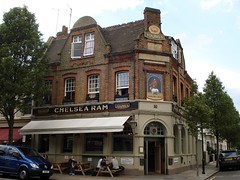 Young's pub in Chelsea. Since the comments below were written, this has become a Geronimo Inns pub (still owned by Young's, but likely to have been refurbished and have a different beer selection).

It's fairly light and airy inside photo, with large wooden tables and some books and boardgames on shelves.

Kake visited on a Monday afternoon in June 2009. There were about half a dozen other customers, some inside and some sitting at the picnic benches outside on the pavement. Sport was playing very quietly on the radio; I don't think there are any TVs. A pint of lime and soda was £1.75. There are three handpulls on the bar, which on this occasion had Young's Bitter, Bombardier, and Courage Directors.

Accessiblity: Small step (more of a ridge) to get in, and it's step-free once you're in, though the ladies' toilets at least have quite narrow cubicles.