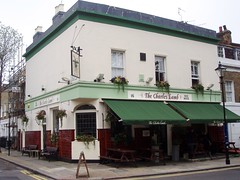 Pub in Islington, near Angel Station and just off City Road.

Note: According to the Oct/Nov 2021 London Drinker, the Charles Lamb was "noted in August as closed and partially boarded up". It's unclear whether this is temporary or permanent.

It's quite small inside; the tables in one room are quite close together, and on the Thursday evening of bob's November 2007 visit the area round the bar was packed. On each visit Ewan has made, he has found it to be similarly popular, though it is fine if you get there early, or at lunchtimes.

There are four handpulls for ale at the bar. In March 2011, they had Thornbridge Lord Marples (£1.60/half), Otley O-Garden, fff Altons Pride, and Dark Star Hophead. The latter is apparently their house ale, with the others changing regularly (and were indeed different on a subsequent visit). There were draught keg taps dispensing Camden Town Hells, Harviestoun Schiehallion, Blanche de Bruxelles, Fuller's Honey Dew, Vedett and Guinness, with Thatcher's Heritage Cider on stillage behind the bar. Many of these were still there on Ewan's visit in June 2012, along with an adequate house lager (Bavo Pils). There's also a good wine list on the chalkboard above the bar, with (as of June 2012) small glasses at £4-6, and bottles ranging from £15-30.

Food is rather interesting, in a gastropubby kind of way. The menu is written up on blackboards photo of menu, Mar 2011. There are mains and desserts as well as a range of bar snacks (such as wasabi peas) and starters (e.g. hummous and toast), and it presumably changes quite regularly.

In November 2007, bob's shepherd's pie with a salad (£9.50) was very tasty. The salad was dressed very well. On a lunchtime visit in March 2011, Ewan's pan-roast pollack with mash and greens and topped with a salsa verde (£12) photo was lovely, and Kake's starter portion of sardines escabeche with salad (£7) photo was flavourful but very bony. A Neal's Yard cheese selection for afters (£7) photo wasn't large, but tasty and good quality.

They used to offer free wireless, but on an Autumn 2008 visit Rowley Birkin QC learned from the staff that this is no longer the case. As of March 2011 they have a selection of board games including Monopoly, Ludo, Scrabble, and a "travel around the UK" game that amused our party with its retro-ness.

Accessibility: A large step to get in at both entrances. A narrow corridor and a small step to the ladies', and the cubicles are quite a squeeze to get in.