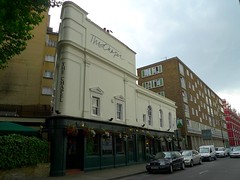 Gastropub in Marylebone, near the Edgware Road stations.

It's fairly gastro-looking inside, though the main space is quite long and narrow. There's a secondary seating space to one side, with a skylight. Food is served lunchtimes and evenings, prepared in an open kitchen at the end of the bar. There's also an outside seating area; picnic benches on decking sheltered from the surrounding roads by tall hedges.

Kake visited on a Thursday afternoon in July 2009. The handpulls had pump clips for Adnam's Bitter and Greene King IPA, but I had lime and soda instead (£1.80 for about two-thirds of a pint, with the soda served from a bottle).

When I arrived around 2:30pm, there were a fair few customers in but still plenty of free tables, perhaps helped by the good weather; most people were sitting outside on the decking. Piped jazz was playing very very quietly. Even the empty tables were a bit messy, with uncleared glasses and strewn crumbs, and remained this way throughout my visit. (Someone who I think may have been the owner/manager appeared and cleaned one of them off just as I was about to leave, but it turned out that this was for his own use.)

Accessibility: Two steps up to get in at left-hand entrance, one step up at right-hand entrance. It's all on one level once you're in, but the ladies' at least is quite small.