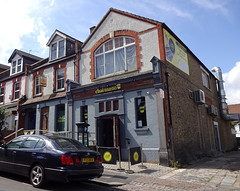 Indian restaurant in Beckenham, just off the High Street.

The decor is a mix of distressed painted wood, exposed brickwork, and corrugated iron. Large booths line one wall, beneath a wooden false ceiling; opposite are smaller tables lined up along a banquette. A feature wall at the back is covered with Bollywood posters, and stylised "bare bulb" lighting fixtures dangle from the ceiling on ropes.

Kake has visited twice now, most recently in August 2019. On a Thursday lunchtime in March 2018, I arrived just after their opening time of noon and was the only customer throughout my visit. '80s music was playing, not too loud. On a Friday lunchtime in August 2019, I was again the first customer of the day when I arrived around 12:15pm, but a group of four turned up shortly afterwards, another two came in while I was there, and four more arrived as I was leaving. The music was much more interesting this time, and again not too loud.

Bhel poori (£5 in March 2018) photo was OK though nothing special. I wished there had been more zing to it, and the two stale puri shells perched on the sides didn't add much, but it did the job. Chilli cheese bites (£5.50 in March 2018) photo were more interesting; a sort of nacho-style cheese sauce inside a thick, chewy shell soaked in a sweet (but not too sweet) chilli sauce.

Chilli momo (£4.50 in August 2019) photo were fine, with a decently textured filling and a not-too-sweet sauce, but they were quite small and there were only three of them. Hariyali aloo chaat (£6) photo was a more reasonably sized portion for the price, but a little one-note, and got a little boring to eat. Kachumbar on the side (normally £2 but not charged for as they were out of the mini poppadoms it was meant to come with) was a welcome serving of crunch and freshness; I don't think I'd have got through the aloo chaat without it.

Tap water arrived on request both times, in a large glass bottle with a metal cup. Service on my first visit was efficient but somewhat unwelcoming, while on my second it was excellent; friendly, welcoming, helpful, cheerful, and efficient. No service charge was added to the bill either time.

Kake's verdict: I might come back if I was in Beckenham, craving Indian street food, and unwilling to get on a bus/tram/train for it, but overall I don't think the quality of the food is worth the price they're charging for it.

Child-friendliness: They have an interesting-looking children's menu, and their website has an entire section urging people to "bring the kids". There were four children present on our second visit, ranging from a weeks-old baby to a pre-teen.

Accessibility: The restaurant has two sides, on different levels, but on all our visits we've only seen the lower side open. There's a steep ramp with a bend in the middle to get in to the upper side. There are no steps at the lower side, but the ground immediately outside is uneven cobbles. There's an accessible toilet with grab bars and pull-down baby change on the lower level, with no steps to it; other toilets are up half a dozen steps.