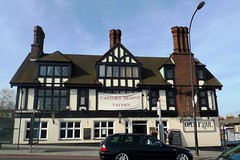 Pub right next to Catford Bridge Station in Catford.

Note: The Catford Bridge Tavern reopened in March 2017 after an extended closure and change of ownership. We haven't visited since, so much of the information below will be out of date. It appears to now be run by a company called Rose Pubs.

As of March 2012 it was an Antic pub. It was sold to the Camden Bars pubco in mid-2013, but never reopened afterwards; it then remained closed until March 2017.

A large Antic pub which, as the name indicates, is right next to Catford Bridge Station in Catford. It opened in March 2012, after having previously been a neglected locals' pub, The Copperfield. As with most Antic pubs, they have an active Twitter account, of course.

On Ewan's visit, on a sunny Sunday afternoon, the place was well attended, with plenty of people enjoying the sunshine in their large rear dining room and lounge, the two areas separated by curtains photo. There's no beer garden as such, but they have some chairs out by the side, on Station Approach.

The bar is well appointed, with several banks of keg beers, including several interesting imported lagers and 'craft' beers (Brooklyn lager, a couple from Thornbridge including Versa, and another English 'craft' keg lager), as well as a large bank of handpulls for ale (around eight of them). Ewan tried a Twickenham Burnham No. 2, a low alcohol 2.8% golden ale brewed for the Antic chain, and not bad (if a little thin), and sold for £2.30/pint; as well as a Moor So'Hop (£1.70/half), which was also well-kept.

A full food menu is served, and there are pork pies, scotch eggs, sausage rolls and other bar snacks kept at the end of the bar counter. The pork pie (£2.50) was good quality and tasty. (Do note however that according to an email from Antic in late March 2012, the pork pies are soon to be discontinued.)

Service is friendly, tables are cleared often, and on the Sunday Ewan visited, there was a full range of newspapers and magazines. There's also a bar billiards table in the front room to the side.

Ewan's verdict: This is a pleasant pub with a good beer range and a friendly attitude, worth a trip to Catford on a sunny day, and a must if you're passing through.

Accessibility: There is a flight of stairs leading from the front door on Catford Road, and also a couple at the side door on Station Approach. However, they keep a ramp on hand, which can be temporarily placed at the Station Approach entrance for step-free access, and there's a doorbell you can use to alert the staff to the need for this. They have also now finished installing their accessible toilet.