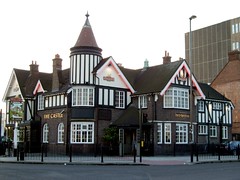 The Castle was a Fuller's pub in North Acton. It has now closed. According to the Aug/Sep 2021 London Drinker, hoardings went up around it in January 2021 and Fuller's have sold it to a property development company who intend to demolish it.

Pleasant Fuller's pub in North Acton opposite the station.

Inside there's plenty of space, comprising several distinct areas and a large wooden bar in the centre. On separate weekend visits a couple of years apart, both sides were showing sports, generally football and rugby (there are two large plasma screens on either side of the bar), while a separate wood-panelled room to the rear of the pub was free of TVs (and also largely empty).

The pub serves well-kept pints of Fuller's beer. Despite having nine handpulls, most have London Pride (£2.85/pint in Jan 2009), with a few also offering ESB. They also have Honeydew, Leffe and Staropramen on draught, among the other usual suspects.

Food is served noon-9:30pm on Mondays to Saturdays and noon-8pm on Sundays. The menu sticks to the usuals, a perfectly decent selection. Nachos for two were £7.50 or so, and nicely presented, with neatly placed piles of salsa, sour cream and guacamole on top photo. On a March 2011 visit, fish and chips (£8) were also nicely-presented, with a little mound of mushy peas aside a lattice-like construction of thick chunky chips (satisfying and crispy).